One of the things that make Havana a lovely place to just wander around is that it has many plazas to explore. One such plaza is the Plaza de la Catedral in Old Havana. It doesn’t look it now, but that particular plaza was once the site of a swamp. For some reason, plans to build a plaza were developed and the area was drained. However, during the rainy season each year, water levels rose and the swamp tried its best to make a comeback…so much so that the original name of the plaza was apparently Plaza de la Ciénaga (Swamp Square). Eventually it was properly drained and it was then used as a naval dockyard. But by 1727, dockyards apparently weren’t sexy anymore or something because plans for a cathedral and various mansions were implemented. Today, there are many things to be found in this plaza, including:

The main thing to see in this Plaza is the Cathedral of The Virgin Mary of the Immaculate Conception. What sets it apart from other Baroque cathedrals found in colonial countries is that the building was constructed out of coral rock removed from the Gulf of Mexico. The coral rock makes for an awesome texture to the building and because it is ocean floor, apparently one can find the remains of marine life in it! I wasn’t lucky enough to find any, but you should take a look! 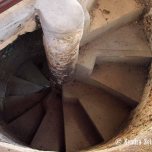 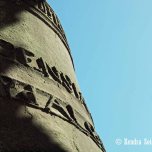 The inside of the cathedral is very simple which appeals to my personal tastes. While there isn’t excessive gold (or really, much of any sort of gold at all), there is still marble for the floors, giant stone pillars, and various pieces of art. There is also a legend which postulates that Columbus was once buried at the cathedral before being moved to Spain after the Cuban War of Independence. Despite the simplicity of the cathedral, UNESCO recognized its cultural and historical significance and made it (along with Old Havana and Havana fortifications) a World Heritage Site. 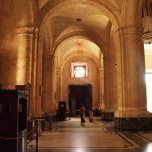 When you visit the plaza, make sure you include some sunset time. The setting light against the stone in this area is really beautiful. Also make sure to climb up the cathedral’s bell tower for a great view onto the plaza and a nice overlook onto Havana’s rooftops. As for having a meal at the plaza, I can’t really say the food is outstanding and on top of that, it is rather pricey. However, if you can get a seat on the balcony, it is quite fantastic for people watching and you can spend a nice leisurely lunch making up stories about the sunburned cruise ship day trippers. You’ll also learn a thing or two about how people earn a dollar or three from said sunburned cruise ship day trippers… 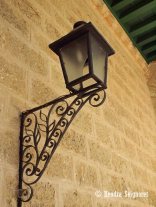 Question: Did you find any marine life in the cathedral walls?