Oaxaca has a number of interesting archeological sites scattered around the state. While some may not be grand and exciting, they do make for a pleasant couple hours of exploring.  One such place is Mitla. This site is a little bit further away from Oaxaca City than Monte Alban as it is about 44km away from the city. Mitla was the main religious center of the Zapotec culture (Monte Alban was the main political center) – even its name denotes the ultimate reason why religions exist: death. Mitla comes from the word Mictlán which means place of the dead. It should be of no surprise that the conquering Spanish apparently decided the word actually meant “hell”. 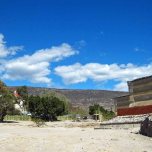 Mitla got its start at least 19 hundred years ago but its peak was between 750 and 1521 A.D. When the Spanish arrived, things changed. Since the site was important to the conquered people, the Spanish did their best to destroy it. As such, not much is left today. Still, there is enough remaining to give you an idea what the place would have looked like in its heyday. You can admire the tombs, carvings, geometric designs, mosaic fretwork, and a fence made by giant cacti. 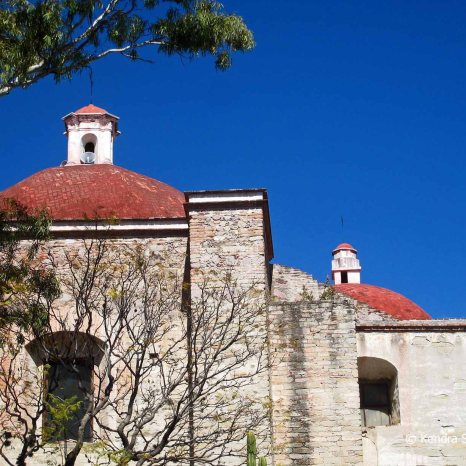 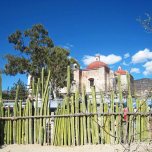 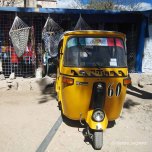 Mitla stands apart from Monte Alban with its bright colour and patterns. Walls are covered in red paint and/or really neat geometric designs. The other difference is that the site was built on the valley floor rather than on top of a hill like Monte Alban…so no grand vistas here. But if you’re a history and/or architecture fan, you’ll enjoy this site. If you’re looking for the proverbial “wow factor”, though, (such as views, giant structures, etc),Mitla may not be your favourite place.

Mitla is included on the Mexican list of national heritage sites which includes other things such as the Tree of Tule. Despite this honour, it isn’t highly visited compared to other places – which sucks for those who make their money selling trinkets to tourists but is fantastic for visitors who don’t like crowds (ie. me). I read that about 500 people on average visitMitla per day and my visit experience seems to support that low number. 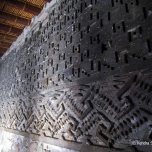 In the end, if you’re in the area, I do recommend a couple of hours to visit Mitla. If you’re not in the area, you won’t miss anything spectacular. It’s a nice place but not a “must see”.

9 responses to “Mitla of Oaxaca”