One of the things that I think enhances travel is finding an opportunity to participate in something local and/or traditional. During my short stay in the Sierra Norte mountains of Oaxaca, I was able to experience a temazcal ceremony. It was…quite the experience, that’s for sure. 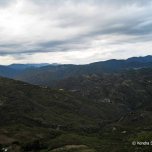 Where we were staying

I was spending the night in a village called San Miguel Amatlan after a hike along the Camino Real. After dropping my backpack off in my cabin, which had phenomenal views of the valleys and mountains, it was off to get cleansed. A temazcal ceremony is similar to a sweat lodge ceremony practiced by various First Nations groups in North America. It dates back to indigenous Mesoamerican time and the word “temazcal” means “house of heat” – which tells you exactly what to expect if you don’t know what is a sweat lodge.

Details in the village 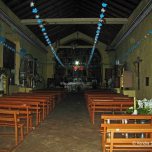 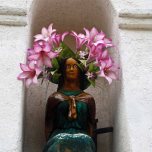 Not sure what she’s doing

The purpose of the temazcal ceremony is health and spirituality – it is supposed to purify your body, heal illness, improve general well-being, and remove essentially what is bad juju. In other words, it is supposed to cleanse the body, mind, and spirit. I’m not a believer in the spiritual but I figured, hey, why not – at the very least, it would be an interesting memory! As we approached the ramshackle building that housed the temazcal, we were instructed to only stay inside as long as our system could handle it. “Meh”, I shrugged. Upon arrival to the ceremony site, I noticed two beds right outside the temazcal. I was like…umm… However, I was assured that the beds were for resting after the ceremony as we’ll need it. Maybe this thing isn’t as easy as I thought it would be?

I’d be doing this ceremony with two American men and a male shaman. We all stripped down to loose shorts but I kept on a bathing suit top – there is only so much traditional I can handle in one go… Once we were all inside, someone dropped the cloth door over the opening, leaving us in semi-darkness. Sitting in the dark hole, not really knowing what to expect, I was very happy I didn’t have claustrophobia – the place was tiny, and made that much more so being occupied by me and three men.

Greeted by this armadillo at the temazcal site

Entrance to the building

Entrance to the temazcal

There was not much spiritual “trappings” to this temazcal which made me happy – I much preferred to be in silence as I breathed through the suffocating steam that billowed into the air as the shaman poured herbal water over hot rocks. Periodically, he thrashed bouquets of branches and herbs over the hot rocks and in the air – it gave the steam a rather nice scent, but I highly doubt that’s the purpose of all that waving. The longer I stayed in the little room, the happier I was that lunch had been small and so long ago – not a good idea to do this on a full stomach. It really didn’t take long before I was absolutely drenched in sweat dripping from pores that were undoubtedly wide open at this point. All you can do is sit, breathe, and drip – anything beyond that would break the focus required not to jump up claiming you’ve had enough (which would just mean bashing your head on the ceiling, anyway). After about, 40 or so minutes (I think), we emerged from the temazcal into the cool mountain air and were promptly wrapped in big towels and made to lie on the beds. Covered under a giant pile of blankets, I half dozed for about a half hour before it was time to change and go.

The leafy fronds used in the temazcal

I wasn’t quite certain how I was feeling as we drove back into the “downtown” part of the village over a dark bumpy road. I do know that by the time we reached our place of feeding, I wasn’t in the mood to eat. Dinner was probably lovely but I couldn’t choke down a bite. The lady who ran the restaurant asked me via the guide if I was having stomach issues after a temazcal and after I confirmed that was the case, she provided the diagnosis: bad spirits. Apparently, during the ceremony, we’re supposed to release all bad things into the air and supposedly, I absorbed everyone else’s bad stuff. I don’t believe it was true but I’m huge on respecting others beliefs/being polite. But when an Alka-Seltzer was offered, I gratefully took it as I thought that would be more likely to solve my problem. It didn’t – one sip of that stuff and I thought I was going to heave. Thank goodness it was time to go back to the cabins.

Have you ever had to sit in a cramped jeep filled with at least one or two too many people, in the dark, bouncing over crater-filled roads, all while fighting to not upchuck on fellow passengers? All I know is that I fairly flew into my cabin upon arrival and raced for the bathroom. Normally bodily functions are a private thing but I was fairly impressed by what came out of my stomach! If you see leaves! How I managed to inhale the herbs and leaves from the temazcal, I have no idea. I also think that I forgot about being in much higher altitude compared to my home valley altitude and should have left the steam room much sooner than I did. I took a Gravol and conked out for the night. 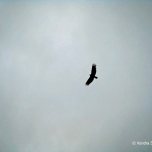 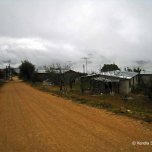 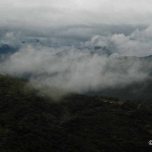 So, do I discount the temazcal? Well, I can’t totally – I do have to admit that I woke up early the next morning, went for a solitary walk through the village and the clouds. It was the best I’ve ever felt – incredibly clear minded, 100% refreshed, and Ioving life in all its glory. I figured the Universe was trying to tell me something when of all things, I saw a chicken crossing the road. I cackled. 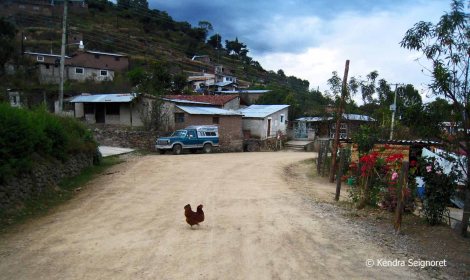 Why did the chicken cross the road?

If you ever get the chance to try a temazcal, I do recommend it. It is one of those unique experiences that you remember for life. Even better if you can do it in a place like the Sierra Norte where it isn’t this slick operation designed to steal your money. But whatever you decide to do, know your limits and don’t stay in the steam room too long!

Another ceremony in which I participated was a limpia. Have you ever done a limpia, a temazcal, or some other similar ceremony?

8 responses to “A Temazcal in Sierra Norte”