Over time, I’ve discovered I really don’t like rushing through places in my travels. A place invariably has so many things to see and experience, I tend to feel great regret not having done them. And regret is a very annoying emotion. One country I have big regrets about is Dominica. I only spent four days here and it was nowhere near enough. One particular piece of the country in which I only spent a couple hours visiting was the Kalinago Territory and it really does deserve a lot more time than that. I don’t know if the area speaks to me because I’m part Kalinago myself but the next time I go, I want to spend at least a few days exploring the forests, learning about various traditional and current ways of life, and connecting to a part of my roots. 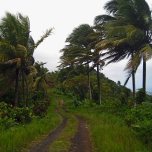 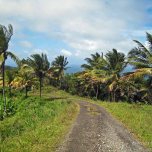 The Kalinago Territory is located in the northeast part of Dominica, on the Atlantic coast. The district is about 3,700 acres (15 km2) in size so it is a fairly big area. The land is mountainous, covered in forests and rivers, and has some incredible coastlines. Only about 3000 people live in the Territory and apparently, they all share communal ownership of the land. The Kalinago Territory was carved out by the British in 1903 and its existence was reaffirmed in the Carib Reserve Act when Dominica became independent in 1978. The Territory is run by a council of five members and the presiding Kalinago chief; popular elections are held every five years. 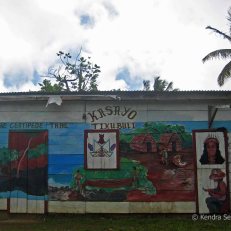 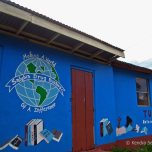 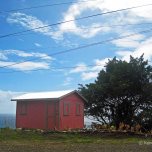 In the past decade, there has been a resurgence in preserving Kalinago culture which includes calling the group by its proper name. I’m sure you’ve seen the word “Carib” in reference to the indigenous peoples of the Caribbean. However, the group in Dominica are properly called Kalinago. Another aspect of the preservation of Kalinago culture includes tourism. In 2006, a model pre-Columbian village was developed in the hamlet of Crayfish River. Its purpose is to promote awareness of Kalinago traditions and history. Here, one can see traditional architecture, experience music and dance, examine various aspects of traditional life, learn about arts and crafts, etc. 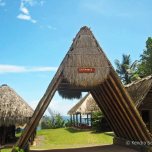 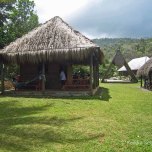 Exploring the Kalinago Barana Auté, the model village, with the provided guide was pretty neat. It was also kind of funny because she and I kept watching other as I just could not get over the fact that it was like staring into the mirror whenever I saw someone of Kalinago descent. But I didn’t know why she was staring at me until she finally asked if I had Kalinago blood so I was very happy to have confirmation that I wasn’t imagining things in terms of what I look like! 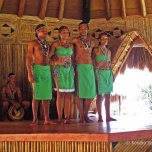 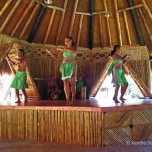 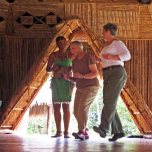 A visit to Barana Auté will include a stop at the karbet, a large no-walled hut in the centre of the village (as it would have been in a real historical Kalinago village). Here, you can find various stage presentations showcasing different aspects of Kalinago culture, including the music and dance performance I saw…and in which I participated. It was absolutely ridiculous – I can’t dance and this was no exception! But it was fun! Other demonstrations that could be seen are basket weaving, a pottery demonstration, and the traditional method of processing cassava. If you don’t see the cassava processing but do come across freshly made bread from it, EAT IT. It is so so good – you don’t even need any sort of topping for it but I do wonder if I would have swooned if it were drenched in butter and came with a hunk of sharp cheddar…

If you ever visit the Kalinago Territory, I do encourage you to spend time and money there. There is no entry fee for the Territory so by buying things, getting a guided hike, etc, you’d be putting money right into the Territory instead giving it to random tour companies. Even consider doing a home stay in the area! There is now a website and I’m happy to share it – check it out here! 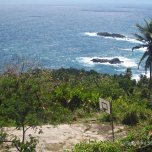 By the way, I’m on a rampage about teaching people how to pronounce this country’s name. My ears bleed when people say Doh-min-i-cuh (as if it were Dominican Republic). Please note that the correct pronunciation is Dom-min-EEKA 🙂

4 responses to “Kalinago Territory of Dominica”