One of my favourite castles in Cornwall, England was Restormel Castle which can be found near the town of Lostwithiel. I really liked it because it is of the motte and bailey style and I remember having to build on in high school for my history class. So it was pretty neat to actually see a real one in person! Restormel was one of four Norman castles of Cornwall and was built around 1100 AD. It was built in the middle of what would have been a sizeable hunting ground so its original purpose probably would have been jointly hunting lodge and fortification. 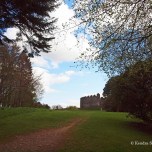 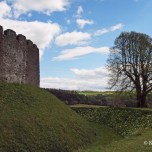 While small, what makes Restormel rather cool is that it is pretty much perfectly circular. There is not a whole lot of the internal structure left but there’s enough to definitely stimulate the imagination. You can still see parts of a kitchen, various rooms, the gate tower, the hall, some stairways, and a chimney. There are also many square holes which would have been where the ceiling/floor beams would have lain, giving this castle two levels. Of course, none of the beams remain as they would have been wood. Apparently, this was a rather luxurious castle once upon a time, as there is evidence that its inhabitants enjoyed piped water! No camping mentality required here! 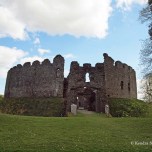 The castle overlooks bucolic Cornish countryside and as I wandered around the place, I started to wonder if English Heritage would sell it to me once I win the lottery… It was so peaceful and I saw more sheep than I did visitors to the castle. The panoramic views were phenomenal and it sometimes just didn’t feel real. Directly around the castle deep dry ditch, which I’m assuming was a moat. The grounds are also covered in flowers (assuming you go in spring) and if there aren’t many visitors, you may see all sorts of birds.

Restormel is now owned by the state and is maintained by English Heritage. There is a parking lot where you can leave your car and a ticket booth with a bored looking man who will give you a ticket in exchange for just under £4. If you ever go, I suggest bringing a picnic lunch and a blanket! And your camera as this place is ridiculously photogenic… 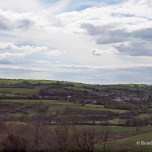 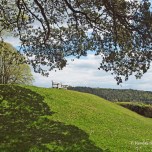 9 responses to “The Cornish Restormel Castle”